Sherry is a fortified wine made from white grapes that are grown near the city of Jerez de la Frontera in Andalusia, Spain. Sherry is produced in a variety of styles made primarily from the Palomino grape, ranging from light versions similar to white table wines, such as Manzanilla and Fino, to darker and heavier versions that have been allowed to oxidize as they age in barrels, such as Amontillado and Oloroso. Sweet dessert wines are also made from Pedro Ximénez or Moscatel grapes and are sometimes blended with Palomino-based sherries. The sherry designation contains some of the driest as well as the sweetest wines on the planet.

Today, sherry, just as with other spirits or liquors, can only be made within a specific region. Known as the Marco de Jerez or “Sherry Triangle,” sherry is made in three towns in Southern Spain — Jerez de la Frontera (known simply as Jerez, and pronounced “he-ref”), Sanlúcar de Barrameda, and El Puerto de Santa Maria.

After fermentation is complete, the base wines are fortified with grape spirit in order to increase their final alcohol content. Wines classified as suitable for aging as Fino and Manzanilla are fortified until they reach a total alcohol content of 15.5 percent by volume. As they age in barrel, they develop a layer of flor—a yeast-like growth that helps protect the wine from excessive oxidation. Those wines that are classified to undergo aging as Oloroso are fortified to reach an alcohol content of at least 17 percent. They do not develop flor and so oxidize slightly as they age, giving them a darker color. Because the fortification takes place after fermentation, most sherries are initially dry, with any sweetness being added later. In contrast, port wine is fortified halfway through its fermentation, which stops the process so that not all the sugar is turned into alcohol.

Wines from different years are aged and blended using a solera system before bottling so that bottles of sherry will not usually carry a specific vintage year and can contain a small proportion of very old wine.

Jerez has been a center of viniculture since wine-making was introduced to Spain by the Phoenicians in 1100 BC. The practice was carried on by the Romans when they took control of Iberia around 200 BC. The Moors conquered the region in AD 711 and introduced distillation, which led to the development of brandy and fortified wine.

Wine production continued through five centuries of Muslim rule. In 1264 Alfonso X of Castile Spain took the city. From this point on, the production of Sherry and its export throughout Europe increased significantly. By the end of the 16th century, Sherry had a reputation in Europe as the world’s finest wine.

Christopher Columbus brought Sherry on his voyage to the New World and when Ferdinand Magellan prepared to sail around the world in 1519. He spent more on Sherry than other significant supplies.

Sherry became very popular in Great Britain, especially after Francis Drake sacked Cadiz in 1587 and acquired 2,900 barrels of Sherry. These spoils of war were brought back to the British Isles and made Sherry very popular. Because sherry was a major wine export to the United Kingdom, many English companies and styles developed. Many of the Jerez cellars were founded by British families. 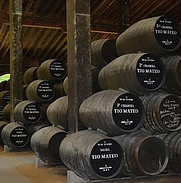 Currently, there are only three white grapes grown for sherry-making:

Immediately after fermentation, the wine is sampled and the first classification is performed. The casks are marked with the following symbols according to the potential of the wine:

a single stroke indicates a wine with the finest flavor and aroma and thus compatible with Fino or Amontillado. These wines are fortified to about 15 percent of alcohol to allow the growth of flor.

A single stroke with a dot indicates a heavier, more full-bodied wine. These wines are fortified to about 17.5 percent alcohol to prevent the growth of flor, and the wines are aged oxidatively to produce Oloroso.

a double stroke indicates a wine that will be allowed to develop further before determining whether to use the wine for Amontillado or Oloroso. These wines are fortified to about 15 percent alcohol.

a triple stroke indicates a wine that has developed poorly and will be distilled.

Fine Sherry and What To Eat

The wines under the ‘sherry’ umbrella range from the lightest and driest in the world right through to the sweetest and everything in between. Here are just a few of the key styles to try and what to eat with them. All but one here are made from the white Palomino grape.

The lightest and driest sherries, with virtually no sugar content. Not the style that most Brits associate with sherry, but these days it’s hugely popular. Treat like a dry white wine.

Straw-colored, crisp, with nutty floral notes. It’s aged under a beautiful layer of ‘flor’ made of local yeasts that protect its light color and give huge flavor to the wine.

A style that started life as a fino, but then aged for several more years creating a delicate and elegant wine, dry, amber-colored with floral and caramel notes, dried fruits and hazelnuts.

Drink with: Perfect with mushrooms, risottos and Spanish rice dishes. It pairs incredibly with asparagus and artichokes, as well as smoked fish and cured meats. Also, brilliant with spiced oriental and Asian dishes. It’s so versatile with most foods.

Oloroso translates to ‘aroma’. It’s powerful and robust, and a bit higher in alcohol (at least 17%). Aged in contact with oxygen, the color has more of a mahogany tinge. Olorosos will be warming, rounded, with hints of wood, hazelnut, and dried fruits.

‘PX’ as it’s often termed is no shrinking violet. If fino is the driest sherry in the world, then this is the sweetest, with up to 50% sugar content! Not made from palomino, but actually from the Pedro Ximenez grape, sun-dried in the Andalucian sun to concentrate its sugars before being pressed.

Drink with: vanilla ice cream as a saturating topping. Also, heavenly with any chocolate dessert, such as churros with hot chocolate sauce. Contrasting it also pairs wonderfully with strong blue cheeses.

Please sample some of our fine selections of Sherry or go to our main site for an absolutely complete selection of fine wines and exceptional beverages for your pleasure. 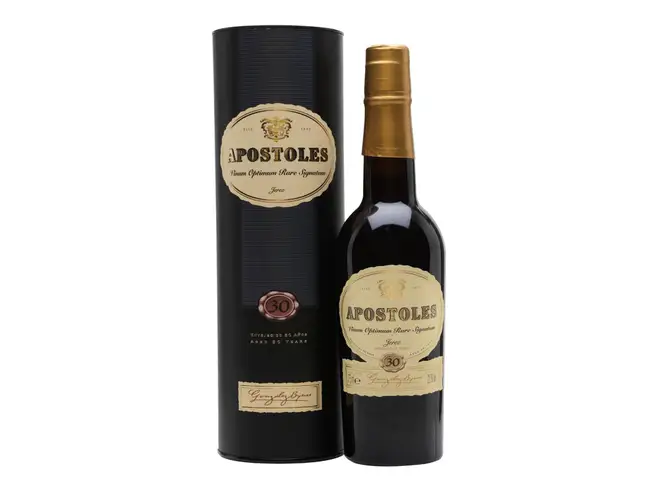 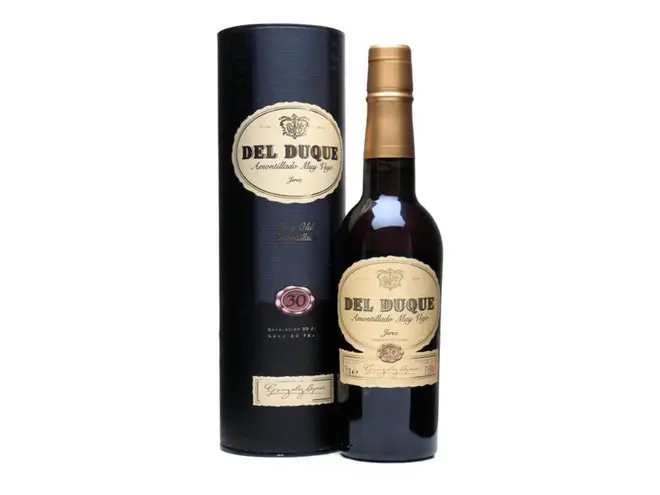