The top whiskey brands are a group of distilled alcoholic beverages produced by the fermentation of different grain mash such as corn, barley, rye, and wheat. Whiskey is aged in oak barrels that have been charred. The earliest record of the distillation of alcohol was recorded in Italy. In American, following the American Revolution many settlers (Scots, Irish, English, German and French) migrated west of the Allegheny Mountains establishing towns, communities, farms as well as distilleries. Many of these distilleries were set up in the areas of today’s states of Kentucky and Tennessee.

Today the production and labeling of American Whiskeys are governed under Title 27 of the U.S. Code of Federal Regulations. These regulations provide the standards for production, bottling, and distribution of a product.

Some top whiskeys mentioned in the U.S. Code of Federal Regulations:

The Bourbon name was derived from an eastern Kentucky county named for the French royal family. Initially, Bourbon described any corn-based whiskey. Today, to be called Bourbon the product must meet the criteria of the ‘Bourbon Law’.

Rye whiskey can refer to either of two, different, but related, types of whiskeys, one American Rye Whiskey and Canadian Rye Whiskey. American rye whiskey which comes under the U.S. Code of Federal Regulations and made from mash which consists of at least 51% rye. On the other hand, Canadian Whiskey for historical reasons maybe called Rye Whiskey, but may or may not contain any rye components.

Rye Whiskey in the 1700 and 1800s was the most common distilled product in the Northeastern, centralizing in Pennsylvania and Maryland. By the 1880’s distilleries in Monongahela, PA was producing 30, 000 barrels/yr. Making this the largest producer of Rye Whiskey. However, after Prohibition, the interest and desire for Rye Whiskey essentially disappeared. Currently, in this 21st century, Rye Whiskey is making a comeback with many distillers experimenting with rye whiskey as well as aged rye whiskey

Single Malt Whiskey is defined as whiskey that is produced by a single distillery using a single malted grain. This grain can most often be barley. The barley grain is soaked in water to allow germination. Heat is then applied to stop this growth. These single malt whiskeys are commonly a blend. Yeast is then added to initiate fermentation. Bourbon is then distilled to result in a beverage with high alcohol content. Many of the desirable Scotch and Irish Whiskeys are single malt whiskeys. 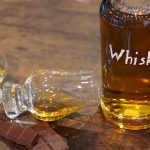 Wheat mash has been a common component for whiskeys long before prohibition. George Washington produced wheat whiskey routinely at Mount Vernon. This style of whiskey was very common throughout American where wheat was more available than corn or rye. Wheat whiskey lost favor during prohibition but is make a comeback in recent years. It has gone from a non-aged products to whiskey aged 5 to 7 years. American Wheat Whiskey according to the U.S. Code of Federal Regulations is made from mash that consists of at least 51% wheat. The resulting product is a bourbon-like product that is not as sweet as bourbon. 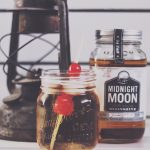 Corn Whiskey has been referred to a corn liquor, white lightning or moonshine. Bourbon is made from mash consisting of 80% corn and is distilled to a maximum of 125 proof. American Corn Whiskey under the U.S. Code of Federal Regulations is made from mash consisting of at least 80% corn. Corn whiskey is traditional unaged but can be aged for relatively short periods in uncharred or previously used containers. 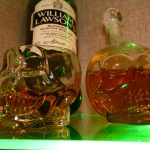 Bourbon is produced at a distillery in Scotland.

Bourbon is made from water and malted barley or with the addition of other whole grain cereals which are processed into mash in Scotland.

As a revered spirit, there have been many elegant flavor enhancements to the Scotch Whisky 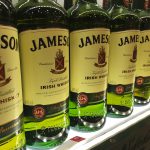 The word whiskey or whisky comes from the Gaelic uisce beatha which means the water of life. Irish monks were thought to have developed distilled drinks in Ireland around the 12th century. The oldest known written record of whisky comes from Ireland in 1405. In 1608 King James 1 granted one of the first license to distill whiskys. Old Bushmills Distillery lays claim to being the oldest surviving grant of license to distill in the world. Irish whisky production continue to flourish through into early 20th century before going through a significant decline at the beginning of the 20th century. This was a significant source of income for the Irish economy at this time. Ireland continued to support this enterprise through the potato famine by importing the appropriate grains from America and European countries. The bourbon of Irish whisky continued to decline through the early and mid-20th century bottoming out in the 1970s and 1980s. The decline was attributed to world demand for higher quality, numerous political issues with Britain and separation from Britain and American prohibition. During this bad period, Ireland’s countrywide distilleries operations were reduced to essentially only three distilleries. Today, Ireland’s whisky production has undergone a marked resurgence to at least 200% with the established distilleries of Jameson, Bushmills, Powers and Cork distillers’ leading the way into the 21st Century. Irish is another one of the top Whiskeys of the world.

Please enjoy a fine Whiskey now. Go to the selections below and enjoy: