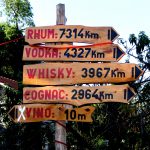 In the scope of liquor world, vodka is the most popular spirit in the USA. Vodka is originally supposed to be a colorless odorless and tasteless spirit. Vodka was historically made from potatoes, corn or grain and produced not in pot stills, but rather high volume continuous column stills. After distillation the product is filtered by several standard processes and bottled. Vodka has never been aged, but bottled immediately after distillation.

The origin of vodka is not clear, but early production and use has been attributed to Poland and Russia. Since the 1890s, the standard Polish, Russian, Belarusian, Ukrainian, Estonian, Latvian, Lithuanian and Czech vodkas are 40% ABV or alcohol by volume (80 US proof). Currently, vodka out sells rum, tequila and gin combined with some of the most popular brands Smirnoff, Swedish Absolute and Grey Goose leading sales.

Gin is a liquor and one of the greats of the liquor world and is one of the largest categories of alcoholic spirits. It has many claims of various origins and flavor profiles that are associated with the significant ingredient of the juniper berry. Gin is thought to have originated in Holland or Belgium where people began to add juniper berries as well as other botanicals such as anise, caraway, and coriander as well as flavoring with turpentine to this spiritual mix. Today’s Gins are still made this way with each brand having its own secret procedures for infusion. Gin was initially used as a herbal medicine treating kidney ailments, lumbago, stomach problems, gallstones and gout.

Gin emerged and became very popular in England in the early 17th century. Gin drinking rose significant after the government allowed unlicensed gin production. The low cost and easy production allowed thousands of gin shops to pop up from 1695 to 1735. 25% of all households in England either or sold gin. 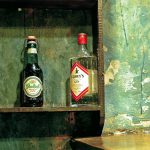 Gin
This is a juniper-flavored spirit made by adding natural flavoring substances to a neutral spirit with the predominant flavor being juniper.

Distilled Gin
Distilled gin is produced exclusively by re-distilling ethanol of agricultural origin with an initial strength of 96% ABV in traditional gin stills in the presence of juniper berries and of other natural botanicals, provided that the juniper taste is predominant.

London gin
London gin is obtained exclusively from ethanol of agricultural origin whose flavor is introduced exclusively through the re-distillation in traditional stills of ethanol in the presence of all the natural plant materials used, the resultant distillate of which is at least 70% ABV. London gin may not contain added sweetening exceeding 0.1 grams of sugars per liter of the final product, nor colorants, nor any added ingredients other than water. The term London gin may be supplemented by the term “dry”.

Gin has a very colorful and exciting history rivaling many other alcohols on the market. Today, Gin is very popular around the world with brands such as Beefeaters, Old Tom and Plymouth leading the way. This liquor is an absolute necessity for many great classic drink, too many to mention except for the longtime greats of the Martini and Gin and Tonic.

Rum aficionados owe their desired beverage to the sweet sugar cane production. Several hundred years ago sugar cane production was well-established in many colonies in and around the Caribbean to supply Europe for their desire for all that is sweet. Sugar production creates byproducts mainly molasses which initially did not have a specific use. It was later discovered that molasses could be fermented and distilled into a fine liquor of the world. This alcoholic beverage quickly became popular in the Americas as well with pirates and sailors.

Today the majority of the world’s rum production occurs in the Caribbean and Latin American where sugar cane growth is prevalent and sustainable. Rum was also infamous for “Slavery Triangle”. The British traders would import molasses to New England based distilleries to produce rum. The proceeds from the sale of rum would be used to purchase slaves in Africa, who would be used in the sugar cane plantations in the Caribbean and South America.

Rum production procedures vary significantly throughout the world, but this narrows down to two types of either dark or light. The color is primarily determined by the time the spirit has spent aging in the oak barrels with the longer the aging the darker the color and the more enhanced flavor. 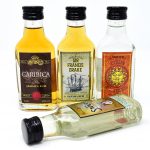 Dark rums, also known by their particular color, such as brown, black, or red rums. These are usually made from caramelized sugar or molasses and are generally aged longer, in heavily charred barrels, giving them much stronger flavors. These show hints of spices along with strong caramel and molasses flavors. Dark rums predominately come from the areas of Jamaica, Martinique and Haiti.

Light rums, also referred to as “silver” or “white” rums. These are generally sweet with not much other flavor. Light rums are usually filtered after aging to remove color. These are typical of rums coming from Puerto Rico and the Brazilian Cachaça.

Gold rums, also called “amber” rums, are medium-bodied rums that are generally aged. These are have a stronger flavor then lights rums and gain some additional color from aging in charred, white oak barrels

Flavored rums are infused with flavors of fruits, such as banana, mango, orange, pineapple, coconut, and lime and mostly served to flavor different tropical drinks. These flavors are added after fermentation and distillation and are usually less than 40% ABV, about 80 proof.

Premium rums, these are high quality boutique brands that are specially produced and aged rums. These are exceptional quality and flavor and mostly consumed straight up.

Spiced rums obtain their flavors through the addition of spices such as caramel, cloves, cardamom, cinnamon, and, sometimes, rosemary pepper or absinthe. These flavors are added after fermentation and distillation. These rums are usually are darker in color.

HOW TO DRINK RUM:
A variety of cocktails use this spirit as the base alcohol including Mai Tai, Daiquiri Mojito and Pina Colada. Rum is also quite good as a sipping liquor.

Tequila is a very interesting beverage of the liquor world that is a fermentation product of the Blue Weber Agave. Agaves are succulent plants with large rosette of thick, fleshy leaves. The heart or fleshy leaves of the plant is peeled, roasted and crushed before the sugar like juice is fermented and distilled. The center of These Agaves are succulents but not related the cactus or aloe plants. True Tequila is produced with only the Blue Agave plant in the region around the Mexican state of Jalisco. The red volcanic soil is these areas is sufficient and necessary for the optimal growth of the Blue Agave.

Pre-Columbian natives from central Mexico produced a fermented beverage from the agave plant known as pulque before European contact. During the occupation of the Spanish conquistadors, to supplement their liquor supply, they would distill agave to produce North America’s first distilled spirit.

Around 1600 tequila was being mass-produced in the first production facility in the territory of modern day Jalisco. By 1608, King Carlos IV granted the first license to commercially produce tequila in the new world.

Tequila is recognized as a Mexican original protected product. Mexican laws state that tequila can only be produced in the state of Jalisco as well as specific areas in the states of Tamaulipas, Michoacán, Nayarit, and Guanajuato. 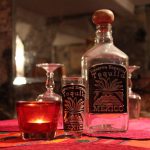 Tequila is usually produced and bottled in one of four categories or types:

THE TASTES OF TEQUILA 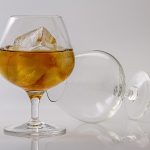 Brandy is a liquor of the world produced by distilling wine. Brandy is derived from the Dutch brandywine or burned wine. Brandy is usually produced from grapes, but is commonly distilled from other fruits such as apples, cherries, plums, pears and peaches to produce fruit brandies. This liquor contains 35-60% alcohol or 70-120 US proof.

Brandy is distilled from base wine in two phases. In the first phase solids and water is removed to produce ‘low wine’. The low wine is distilled again in the second stage to become brandy. Some brandies are aged in wooden casks, some are colored with caramel coloring to imitate the effect of aging, and others are produced using a combination of both aging and coloring.

There are basically three types of brandy. These include American grape brandy comes from California, Armagnac brandy from the Armagnac region of France, Brandy de Jerez from Spain, Pisco from Peru and Chile.

HOW TO DRINK BRANDY: Older brandies are best enjoyed neat. Younger brandies can be found in a large selection of cocktails. Brandy drinks range from the Stinger, Sidecar, Pisco Sour, Last Resort as well as the Original Sazerac and many others. 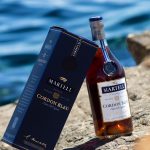 Cognac, Is a brandy produced in and named for the town of Cognac in the Charente and Charente-Maritime départements of France. French law limits the use of the name Cognac to brandy made from the wine of a specified grape variety, distilled twice in special pot stills, and aged for a prescribed period in Limousin oak. Cognac initial came to be in the early 17th century. Early on the brandy from the Cognac region was recognized as a superior product and thus became strictly regulated. All possible steps or procedures in the production to cognac/brandy from the growing of grapes to the distillation of the new cognac/brandy, must take place within certain delimited areas

Cognac is produced in seven designated areas of the Charente and Charente-Maritime départements. The primary areas of importance are the Grande Champagne and Petite Champagne followed by Borderies, Fins Bois, Bons Bois, Bois Ordinaires, and Bois Communs. The age of a cognac is essentially the time spent in wood barrels. The older the cognac, the smoother, more complex, and more refined it becomes, though it is rare for cognac to remain in cask beyond 40 or 50 years. Most cognacs spend from one and one-half to five years in barrels. The final product brought to your table is a blend of cognacs from the various districts, and aged for various periods of time in fine Limousin oak barrels.