Pinot Gris is a white-wine grape originally from the vineyards of Burgundy. Pinot Gris Wine is now found in wine regions all over the world. Pinot Gris, or Grauburgunder is a white wine grape variety of the species Vitis vinifera. Thought to be a mutant clone of the Pinot noir variety, it normally has a grayish-blue fruit, accounting for its name but the grapes can have a brownish pink to black and even white appearance. The word pinot could have been given to it because the grapes grow in small pine cone-shaped clusters. The wines produced from this grape also vary in color from a deep golden yellow to copper and even a light shade of pink, and it is one of the more popular grapes for skin-contact wine.

Pinot Gris grapes are naturally low in acidity. Although sometimes used as a blending component, Pinot Gris is usually produced as a varietal wine. Flavors and aromas vary greatly from region to region and from style to style. But common features include notes of pears, apples, stone fruit, tropical fruit, sweet spices and even a hint of smoke or wet wool. Most winemakers avoid obvious oak character in their Pinot Gris, but some use older more neutral barrels for fermentation. For weightier, more complex styles of Pinot Gris, partial malolactic fermentation are commonly used. Sweet late-harvest wines are also common and high in sugars. Therefore, the finest Pinot Gris wines come from the world’s cooler viticultural regions. Those from warmer climates tend to lack acidity and structure and can seem too alcoholic. Europe’s showcase examples come from vineyards on either side of the Rhine river, from Baden and Pfalz in Germany and, particularly, the Alsace region in France. In these regions, the wines are made in varying levels of sweetness, from bone dry to lusciously sweet. A Pinot Gris Selection de Grains Nobles from Alsace is one of the sweetest, most intensely flavored wines on earth.

Pinot gris is grown around the globe with the “spicy” full-bodied Alsatian and lighter-bodied, more acidic Italian styles being most widely recognized. The Alsatian style, is often duplicated in regions such as Marlborough, Tasmania, South Australia, Washington, and Oregon, tend to have moderate to low acidity, higher alcohol levels and an almost “oily” texture that contributes to the full-bodied nature of the wine. The flavors can range from ripe tropical fruit notes of melon and mango to some botrytis-influenced flavors. In Italy, Pinot grigio grapes are often harvested early to retain the refreshing acidity and minimize some overt-fruitiness of the variety, creating a more neutral flavor profile. This style is often imitated in other Old World wine regions, such as Germany. 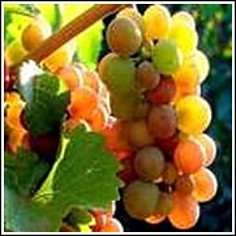 Pinot Gris has been known since the Middle Ages in the Burgundy region, where it was probably called Fromenteau. It spread from Burgundy, along with Pinot noir, arriving in Switzerland by 1300. The grape was reportedly a favorite of Emperor Charles IV, who had cuttings imported to Hungary by Cistercian monks and these brothers planted the vines in 1375. In 1711, a German merchant, named Johann Seger Ruland (re)discovered a grape growing wild in the fields of the Palatinate. The subsequent wine he produced became known as Ruländer and the vine was later discovered to be Pinot Gris.

Until the 18th and 19th century, the grape was a popular planting in Burgundy and Champagne but poor yields and unreliable crops caused the grape to fall out of favor in those areas. The same fate nearly occurred in Germany, but vine breeders in the early 20th century were able to develop clonal varieties that would produce a more consistent and reliable crop.

Researchers at the University of California, Davis, have determined that Pinot Gris has a remarkably similar DNA profile to Pinot noir and that the color difference is derived from a genetic mutation that occurred centuries ago. The leaves and the vines of both grapes are so similar that the coloration is the only aspect that differentiates the two.

A member of the extended Pinot family of grape varieties, Pinot Gris is a pink-skinned mutation of Pinot Noir. The two varieties are indistinguishable in the vineyard right up until fruit becomes softer near harvest. Then Pinot Gris berries take on their distinctive array of colors; anything from orange-pink to pale, dusty purple. The adjective gris is French for “gray” and refers to the dusty, light-gray sheen the grapes often take on.

A major grape is Alsace, grown on 13.9% of the region’s vineyard surface in 2006, the varietal Pinot Gris d’Alsace (France) is markedly different from Pinot Gris found elsewhere. The cool climate of Alsace and warm volcanic soils are particularly well suited for Pinot Gris, with its dry autumns allowing plenty of time for the grapes to hang on the vines, often resulting in wines of very powerful flavors.

Pinot Gris is one of the so-called noble grapes of Alsace. Previously, the Pinot Gris wines produced in Alsace were originally labeled Tokay d’Alsace. In the Middle Ages, the grape was popularized in the region by Hungarian traders who were introduced to the grape from Burgundy. During this time, Tokaji was one of the most popular and sought after wines on the market and the name was probably used to gain more prestige for the Alsatian wine. Pinot Gris was believed to have been brought back to Alsace in the 16th century. It was planted in Kientzheim under the name “Tokay”. Tokay Pinot Gris was adopted as an intermediate step, with the “Tokay” part to be eliminated in 2007. Many producers had implemented the change to plain Pinot Gris on their labels by the early 2000s.

Pinot Grigio is a popular planting in northeastern Italy in regions such as Friuli-Venezia Giulia.

In Italy, where the grape is known as Pinot grigio, plantings can be found in the Lombardy region around Oltrepo Pavese and in Alto Adige, Italy’s northernmost wine region. The grape is also prominent in the Friuli-Venezia Giulia region.

Pinot Gris was first introduced into Australia in 1832 in the collection of grapes brought by James Busby.] In Victoria, wines from the grape are labeled both Pinot Gris and Pinot grigio, depending on the sweetness of wine with the drier wines being labeled Pinot grigio.

Pinot Gris is grown in both the North, Waiheke Island (Hawkes Bay, Gisborne), and South Islands with 1,501 Ha producing as of 2009. This is over a 100% increase since 2006. In 2007, Pinot Gris overtook Riesling as the third most planted white variety after Sauvignon blanc and Chardonnay. Half of all plantings are in Canterbury and Marlborough, with the wine developing a “rich, flinty, fruit-laden character”.

Eyrie Vineyards planted the first American Pinot gris vines in Oregon in 1965. Hoping to increase sales, this vineyard started to graft Riesling vines to Pinot Gris in 1979. The grape originally had difficulties finding a sustainable market until they started aggressively marketing the wine. The wine’s popularity only increased slightly until the mid-1990s when well-capitalized larger producers entered the picture with enough volume to warrant expensive marketing. In 1991, King Estate Winery was founded with a mission to produce enough high-quality Oregon Pinot Gris to develop a sustainable national market for the wine. They are credited with bringing the Pinot Gris grape varietal into the national consciousness in the US Today they are the world’s leading producer of premium Pinot Gris and farm the world’s largest contiguous organic vineyard which contains over 300 acres of Pinot Gris grapes.

There are about 1,620 acres planted in the Central and South coastal areas of California. The Pinot Gris from California is often called Pinot grigio because of its similarity in style to the wine of Italy.

Wines made from the Pinot Gris vary greatly and are dependent on the region and winemaking style they are from. Alsatian Pinot Gris is medium to full-bodied wines with a rich, somewhat floral bouquet. They tend to be spicy in comparison with other Pinot Gris. While most Pinot Gris are meant to be consumed early, Alsatian Pinot Gris can age well. German Pinot Gris is more full-bodied with a balance of acidity and slight sweetness. In Oregon, the wines are medium-bodied with a yellow to copper-pink color and aromas of pear, apple, and/or melon. In California, the Pinot Gris are more light-bodied with a crisp, refreshing taste with some pepper and arugula notes. The Pinot grigio style of Italy is a light-bodied, often lean wine that is light in color with sometimes spritzy flavors that can be crisp and acidic.

Pinot Gris is considered an “early to market wine” that can be bottled and out on the market within 4–12 weeks after fermentation.

Pinot Gris is a fantastic white wine. Pinot Gris is always dependent and versatile. This is an acidic wine that will cut through the fat of neutral meats, and won’t clash with most sauces, dressings, condiments or side dishes.

A to Z Pinot Gris