The name Pinotage South African Wine is a little bit misleading because it sounds so much like Pinot Noir. This South African grape is related to Pinot Noir but the grape looks and tastes more like Shiraz. Its reputation has been mostly confined to South Africa.

The result of the crossing between Cinsaut and Pinot Noir was unexpected. The Pinotage grapes were extremely dark and the wine they created was bold and high in tannin and anthocyanin. Despite the difference in flavor, Pinotage would eventually become the 2nd most planted grape in South Africa.

Pinotage is a red wine grape that is South Africa’s signature variety. It was cultivated there in 1925 as a cross between Pinot noir and Cinsaut (Cinsaut was known as “Hermitage” in South Africa at that time, hence the portmanteau name). It typically produces deep red varietal wines with smoky, bramble and earthy flavors, sometimes with notes of bananas and tropical fruit, but has been criticized for sometimes smelling of acetone. The grape is a viticultural intraspecific cross of two varieties of Vitis vinifera, not an interspecific hybrid. 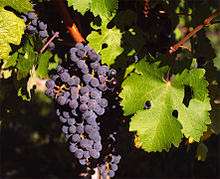 The first recognition came when a Bellevue wine made from Pinotage became the champion wine (General Smuts Trophy Winner) at the Cape Wine Show of 1959, a feat repeated by Sauer & Rossouw in 1961 with their Pinotage from Kanonkop Wine Estate. The Bellevue wine would become the first to mention Pinotage on its label in 1961 when Stellenbosch Farmer’s Winery (SFW) marketed it under their Lanzerac brand. This early success, and its easy viticulture, prompted a wave of planting during the 1960s. Pinotage is a grape variety that was created in South Africa in 1925 by Abraham Izak Perold, the first Professor of Viticulture at Stellenbosch University. Perold was attempting to combine the best qualities of the robust Hermitage with Pinot noir, a grape that makes great wine but can be difficult to grow. Perold planted the four seeds from his cross in the garden of his official residence at Welgevallen Experimental Farm and then apparently forgot about them. The young plants were moved to Elsenburg Agricultural College under Perold’s successor, CJ Theron. In 1935 Theron grafted them onto newly established rootstock. The newly grafted vines and the one that was doing best was selected for propagation and was christened Pinotage.

On great bottles of Pinotage South African Wine you’ll be delighted by the flavors other than fruit. A wide array of other flavors include rooibos, dried leaves, bacon, sweet and sour sauce, hoisin and sweet pipe tobacco.

You should expect tannins to be bold but to have a sweet note on the finish –almost like flavored smoke. As far as acidity is concerned, the grape is typically high pH (low acidity) so most winemakers will acidify their wines early in the fermentation process so the acids are more integrated. Many wineries in hot climates, including California, Australia and Argentina, acidify their wines. Well-integrated acidification is unnoticeable although some tasters appear to be more sensitive to this trait than others.

Pinotage remained relatively obscure internationally until Beyers Truter from Kanonkop won the 1987 Diners Club Wine of the year for his Pinotage. Pinotage has since experienced a renaissance in South Africa, with an increasing number of producers exploring a bright and juicy expression of the variety that shows off the fruit rather than oak, and showing real finesse with less ripe extraction.

In the past two decades, winemakers and marketers have embraced this grape cultivar which lead to the expansion of the market for Pinotage globally. Competitions like the Absa Top 10 Pinotage Awards, which started in 1997, and initiatives by organizations like the Pinotage Association have assisted in establishing this uniquely South African wine. Accolades like the 2017 Tim Atkin’s South African Red Wine of the Year confirms the trend of quality Pinotage wines. Pinotage weighed heavily in favor of Kanonkop cellarmaster Abrie Beeslaar being named the 2017 Winemaker of the Year at the prestigious International Wine & Spirit Competition in London, making him the second Kanonkop winemaker to achieve the honor. Of the Top 10 most-planted wine grape varieties in South Africa, Pinotage is the only red cultivar to have grown in hectares over the past 10 years (2007-2017).

In addition to South Africa, Pinotage is also grown in Brazil, Canada, Israel, New Zealand, United States, and Zimbabwe. In New Zealand, there are 94 acres (38 ha) of Pinotage. In the US, there are plantings in Arizona, California, Michigan, Oregon and Virginia.

The majority of the world’s plantings of Pinotage is found in South Africa, where it makes up just 6% of the vineyard area but is considered a symbol of the country’s distinctive winemaking traditions. It is a required component (30-70%) in “Cape blends”. Here it is made into the full range of styles, from easy-drinking quaffing wine and rosé to barrel-aged wine intended for cellaring. It is also made into a fortified ‘Port wine’ style and even a red sparkling wine. The latest and fastest-growing trend is the production of coffee styled Pinotage. The grape is very dependent on the skill and style of winemaking, with well-made examples having the potential to produce deep-colored, fruity wines that can be accessible early as well as age.

The vines are vigorous like their parent Cinsaut and easy to grow, ripening early with high sugar levels. Pinotage can be grown via the trellised system or as bush vines (untrellised). The older Pinotage vineyards are predominantly planted as bush vines and it is perceived that these lend to more concentration of fruit and depth to the wine. It has the potential to produce yields of 120 hl/ha (6.8 tons/acre) but older vines tend to lower their yields to as low as 50 hl/ha. Yield restriction is managed through water stress and bunch thinning. In winemaking, controlling the coarseness of the grape and the isoamyl acetate character are two important considerations. Volatile acidity is another potential wine fault that can cause Pinotage to taste like raspberry vinegar. Since the 1990s, more winemakers have used long and cool fermentation periods to minimize the volatile esters as well as exposure to French and American oak.

The grape is naturally high in tannins which can be tamed with limited maceration time but reducing the skin contact can also reduce some mulberry, blackberry and damson fruit character that Pinotage can produce. Some winemakers have experimented with letting the grapes get very ripe prior to harvest followed by limited oak exposures as another means of taming the more negative characteristics of the grape while maintaining its fruitiness. Newer clones have shown some potential as well. 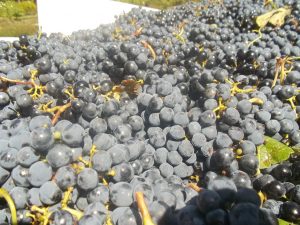 While large-scale bulk production tended to yield a wine of little distinction, some wonderful examples of Pinotage were made not long after Lanzerac became the first to sell it commercially in 1959. Lanzerac and Kanonkop were early flag-bearers, and indeed still are, for two of their labels made it into the 2017 ABSA top 10 Pinotage Wines. 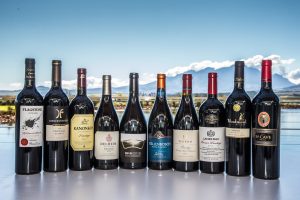 Please sample and order from our selections below or go to our main site winetospiritscrown for a complete selection of all wines and beverages.